Forbes recently published the second edition of its Blockchain 50. The list aims to capture the billion dollar companies most active in blockchain. To be included in the Blockchain 50, a company must have a valuation above $1 billion.

A quick glance down the list reveals a mixture of banks, tech’s heavy hitters, FMCG companies, and a handful of crypto players. If you get anything out of this list, it should be this: the biggest companies in the world are working on blockchain technology right now.

We wanted to dive a little deeper into the Blockchain 50 and see if we could spot some interesting trends. Read on for insights into the most popular use cases and development platforms on this year’s list. Because this is about blockchain, there will be a lot of healthy debate about who made the cut and who didn’t.

Are you new here?

Compared to last year’s list, 24 companies have been added/removed, with new entrants including General Electric, LVMH, Aon, and Chinese tech giants Baidu and Tencent. Missing from the Blockchain 50 are Oracle, MetLife, and Visa (who also left the Libra Association). Another company notable in its absence is Danish shipping firm Maersk, known for its TradeLens platform that is used by hundreds of carriers, ports, customs offices, etc. in the global supply chain. 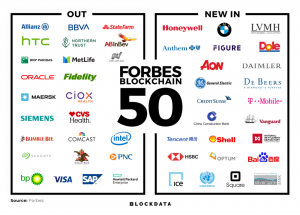 24 companies are new to the Forbes Blockchain 50.

Shifting the focus back to the companies that did make the list, we can look at the blockchain platforms they are working with. Hyperledger Fabric is the most popular outright with 24 companies using the permissioned ledger. Ethereum is a close second with 22 firms. Corda from R3 is used by 11 companies, including GE, Nasdaq, UBS, Aon, and BMW. Quorum, JPMorgan’s enterprise-focused version of Ethereum, is used by 7 companies. 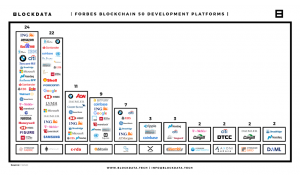 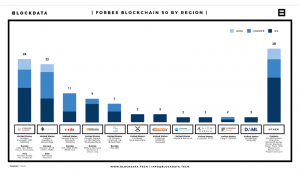 It’s how you use it

The use cases being tackled include all the usual suspects, covering everything from digital assets to supply chain solutions. Here are some of the most popular use cases addressed by companies in the Forbes Blockchain 50:

There are also some very interesting developments in the areas of digital identity and identity management, from T-Mobile’s NEXT Identity Project to the blockchain ID solutions being trialled by the United Nations. Automotive companies are also developing solutions in this area, with Daimler giving trucks their own digital identities to allow automatic payments for electric charging stations via Truck-ID and TruckWallet. 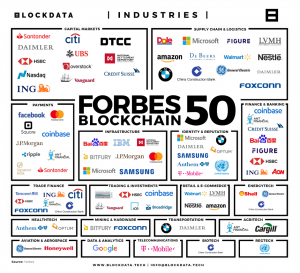 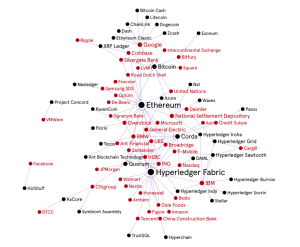 The sheer variety of companies in the Forbes Blockchain 50 shows that blockchain is far from being confined to a few niches. Indeed, these companies represent a fraction of the activity we’ve seen in the space in the last two years. The fact that so many notable firms missed out on this year’s list is much more to do with the increased activity from all major firms, rather than a loss of interest from those companies. We predict that 2020 will see a record amount of blockchain initiatives come to fruition, as more companies move from pilot to production.